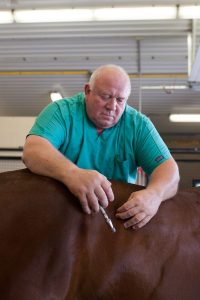 Dr. Robertshaw was born and raised on an Oxford County dairy farm near Innerkip. In 1978, he graduated from the Ontario Veterinary College at the University of Guelph and for the past 41 years, he has devoted his time to the health and welfare of animals and their owners in Elgin County.

Most of Vern’s time is spent working on horses and small animals. Vern spends a lot of his time performing equine dentistry. Vern has the unique perspective of having many years of experience with Western medicine and also being trained in chiropractic, acupuncture and Chinese herbal veterinary medicine. He believes that these alternative therapies have given us tools to help our patients live longer, happier lives when chronic diseases such as arthritis and allergies do not respond to traditional therapy.

Vern lives west of Aylmer. He has 3 daughters: Marissa, Ainslie and Blaire. Vern enjoys spending time on his island in the Pickerel River near Port Loring. 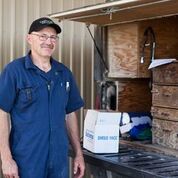 Dr. Wayne Caroll is a lifelong resident of Shedden, ON. He graduated from the Ontario Veterinary College in 1989 and later joined doctor Robertshaw in Aylmer. Dr. Carroll specializes in equine medicine.

Wayne resides in Shedden with his wife Karen and their 4 children. Dr. Carroll along with his wife, own, raises and races Standardbred and Thoroughbred horses. 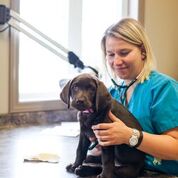 Dr. Amanda Wiltsie Thoonen grew up in rural Elgin County and enjoyed caring for her family’s dogs, cats, horses, and chickens. Upon graduation from the Ontario Veterinary College in 2006, she returned to her hometown to begin her veterinary career.

Amanda joined the team at Imperial Road Animal Hospital in May of 2011 and works exclusively with small animals. Although she enjoys most facets of small animal medicine and surgery, she is passionate about dental care as well as nutrition and loves the challenges that dermatology and endocrine diseases pose.

Amanda lives outside Aylmer with her husband Leon, their busy 9 and 11-year-old; Cairn “terror” (Terrier) Scruffty, and we recently added a third cat “Cinnamon”. Amanda is a loud and proud hockey Mom and spends most of her spare time at the rink.

Dr. Rachael Needles grew up in Thorndale, ON on a hobby farm with donkeys, horses and ducks. She graduated from the Ontario Veterinary College in 2017 and completed a six month internship at Milton Equine Hospital prior to starting at Imperial Road Animal Hospital.

Rachael is a large animal veterinarian with a special interest in equine and small ruminants. She is passionate about emergency medicine and helping our large animal friends whenever they need it.

Rachael lives in Tillsonburg with her husband Deven, their Doberman/shepherd Lexi, two cats Sake and Keira and her Appaloosa/Arab horse Basil. In her spare time, she enjoys riding, dancing, and painting.

Dr. Lisa Gordon grew up in Richmond Hill, ON and graduated from Ontario Veterinary College in 2019. She has joined the Imperial Road Animal Hospital as a mixed animal veterinarian.

Her special interests include ruminant medicine, pocket pets and birds – especially chickens! At her home near Tillsonburg, she has a coop with six hens and a delightful retired racing greyhound named ‘Lady Sybil Crawley’. She and her fiance, Alex will be married in September 2019! 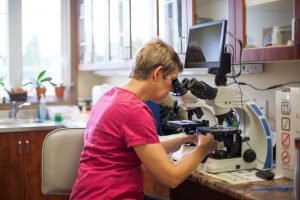 A lifelong resident of Aylmer, Maria raised, trained and showed Arabian horses for 35 years. She began working for Dr. Robertshaw after graduation with honours from the animal laboratory technician program at Ridgetown College in 1986.

Over the years, Maria’s job at the clinic has evolved into an administrative role, but Maria can still be found behind gown, mask, cap and gloves as a surgical assistant and most frequently behind the microscope where she cannot hide her passion for cytology.

Maria has 2 beautiful daughters. One is currently attending the University of Calgary obtaining a PHD in psychology oncology and one is hoping to enter law enforcement. Her furry family members include a dog, and 2 cats, but she has a special place in her heart for horses.

The thing Maria most enjoys about her job is keeping all animals healthy and happy, including squirrels!

Candy, her husband Jeremy, and her two handsome sons, Tristan, Hayden share their home with a beagle named Gracie.

When Candy cannot be found at the clinic she is camping or spending time with her busy family (human and furry!) 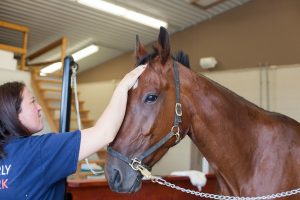 Marissa has been part of the team since she was a little girl. She can be found helping any of our doctors with large animal calls, or in the Shedden office.

She lives just outside of Aylmer on the family farm. Marissa has numerous “fur children” who live with her.

Melanie grew up on a hobby farm just outside of Alymer and cared for an array of pets, including cats, dogs, ferrets, birds, pigs, horses, and even a skunk. Mel graduated from Sheridan College in 2010 and came to work at Imperial Road shortly thereafter. Mel enjoys connecting with pets and their people.

Mel lives locally with her husband Justin, son Griffin, daughter Paige, and their dog Berkley. When she is not busy enjoying her family, Mel likes to read, work on home projects, and spend time outdoors.

Lindsay joined the team in March 2017. She graduated from Georgian College’s veterinary technician program in Orillia, ON in 2009. Over the years, she has worked at several small animal practices in Ontario and Alberta, in emergency medicine, and in the area of dental referral.

She has a passion for dentistry, emergency medicine, and the Farley Foundation. Lindsay is certified in RECOVER CPR for animals.

She lives in St. Thomas with her son William, a beagle named Penny, a basset hound named Nora, a three-legged cat, Hat Trick, and a cockatiel, Cuthbert.

Jade grew up in Norfolk County on a small hobby farm with dogs, cats, and horses. She graduated from Seneca College in 2010. Jade always knew growing up she wanted to become a Registered Veterinary Technician. She enjoys every part of the job but has a special love for cats as she worked for 8 years in a feline specialty practice. Jade lives in Courtland with her Fiance Jordan, a cat Edwin, a lab named Athena and a Goldendoodle named Byron. In her spare time, she enjoys trail riding, camping with her horse Sugar and spending time with her family. Jade and Jordan are expecting a baby boy in June 2020.

Bre joined the clinic in 2015 after completing her externship with us. Bre can also be found at our satellite clinic, Shedden Veterinary Clinic. She is a Ridgetown graduate of the veterinary office administration program. Bre is also one of our adoption coordinators for cats and kitten in the clinic that need homes.

Bre currently lives in Dutton with her boyfriend Sean, and cats, Larry, and Lucas, and dog, Bert. In her spare times, she enjoys figure skating and using her artistic talents creating wooden wall art.

Carley joined our team as a receptionist in August 2019. She has completed the medical office administration program at Fanshawe College. Carley has always lived in the area, but has settled in St. Thomas. She lives with a black cat named Lupin, and a quarter horse named Nimbus. In her spare time she enjoys spending time at the barn, riding, crafting, watching Netflix, and snuggling critters!

Charlie joined the team in February 2019 as a veterinary assistant, after completing her high school externship with us in 2017.

Charlie can be found in clinic helping with our small animal surgeries and appointments or on the road with our large animal veterinarians.

Charlie grew up a short distance from Aylmer in her childhood home. She has 3 cats Nacho, Trouble, and Scooter, and a dog, Hank.

She hopes to pursue a degree as a veterinary technician and eventually gain her registration status. 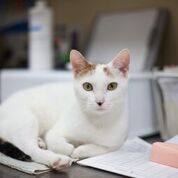 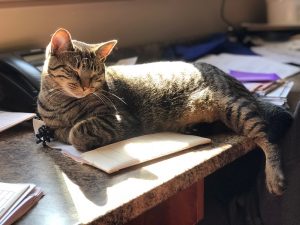